New work:
Recently announced is a new Phantom series of comic novellas from Moonstone Books titled: The Phantom "Generations". I have been assigned to do the 20 covers of the series. And I felt this was the perfect opportunity for me as an artist to get back into the ink. This is very exciting for me to do a series of comic book covers for The Phantom where I will be able to stretch out a bit more and pull out the ink pen and brushes and collaborate with some really creative friends in producing the covers.

My good friend, Ruben Procopio has been a big inspiration over the years with his amazing sculptures from Electric Tiki and Disney to his black and white illustrations in "Tales from Zorro" and "The Phantom Chronicles". One of my all time favorite Phantom covers is his stark, noir-ish Phantom in the shadows for Moonstone's first Annual last year. Simply, brilliant. And we have been discussing some possibilities of working together ever since.

After Joe Gentile discussed the series of covers with me, I immediately thought of two things: working in black and white (to be digitally colored) and asking Ruben if he wanted to collaborate. Iron sharpens iron... and I'm working with the best.
There's one goal in mind with doing these together: to make them the best possible images of The Phantom.

I had already roughed out the first cover of "Generations" when I approached Ruben. But, we've already started developing the series of covers and we will be sharing the credit for the rest of the run. There's no formula yet; together we'll both brainstorm a batch to get approvals from Moonstone and for the time being, I'll pencil the finish and either I'll ink the entire piece (like this first one), partially ink for Ruben to take over and finish it or he'll ink the entire cover over my pencils.
We're going with the flow for the time being. 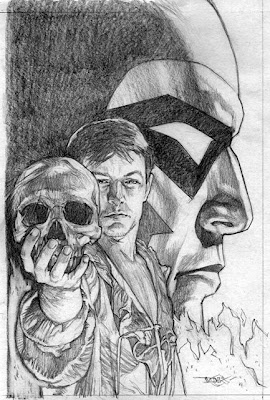 So, here's the first issue cover that I have titled, "The Oath". For those who have come in late... this is Christopher Standish Jr. making the legendary oath upon the skull of his fathers murderer: "I swear to devote my life to the destruction of piracy, greed, cruelty, and injustice, in all their forms! My sons and their sons shall follow me." 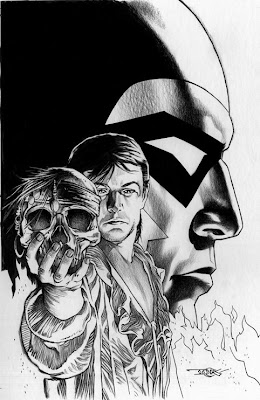 The inked art was then handed over to my friend and color artist, Jason Millet to finish. Jason was fantastic to collaborate with as well and he did an exceptional job. 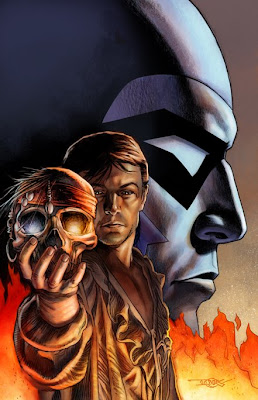