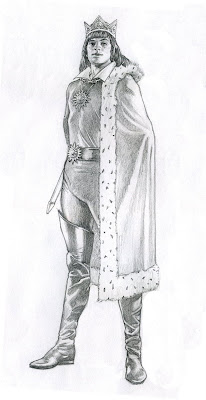 It's that time again! Wizard World arrives in Rosement, Illinois for the Chicago Comic-Con, August 6-9. And while I won't be in Artists Alley this year, I will be at the show at a couple of different spots over the week end.

On Friday I will be signing at the Elmhurst Historical Museum booth #1236 (and co-sponsored by the American Academy of Art of Chicago) from 3-4pm. Come by and pick up a free limited edition print of The Black Terror, compliments of the museum and the American Academy.

On Saturday I will be a part of the Dynamite Entertainment panel from 2-3pm in Room D, the Bob Kane Room. Stop in and say "hello". The above image of The Boy King is a study from one of the latest Origin spreads I painted for their series, Project Superpowers. The pencil was featured on Newsarama last month. I'll post something here later on as well as some of the other recent Origins I've been working on with Alex Ross and Jim Krueger (and keeping my schedule mighty busy).

And I am sure I will be at the Moonstone Books booth at some point during the week end but I haven't had any confirmation yet.
If anyone would like me to bring sketches, drawings, paintings, prints or books that they can pick up from me, please send an email. I've had a few inquiries already (thank you!) so it's not too late to send your requests.
The rest of the time I'm going to be walking the show visiting friends and hanging out with my son. I'm looking forward to it!
See you there!
Posted by Douglas Klauba at 11:57 AM No comments: