The Shape Of Things To Come title is a description of where I think my artwork is at as I continuously develop a new body of work as an artist and illustrator. Of course it also hints at the conceptual stages from thoughts, pencil roughs and studies to finished paintings. Here, I hope to share the adventure of how the works take “shape” and what “comes” out of the process.
And if you have a copy of my Sketchbook, I’m going to discuss the drawings in the book page by page. It shows glimpses of where I have been as an illustrator and hopefully where I think the work is headed. And I welcome your interaction.

The Sketchbook is a collection of my drawings and roughs that have been appreciated by clients and friends. Many suggested that I begin to show them as a separate portfolio or a devoted section on my website. So my friends at Olympian Publishing shared my vision and helped me select a “behind the scenes” showcase of seldom seen drawings and we got it to press.

The book opens with a “Foreward” by my friend Jim Steranko, much to his surprise I’m sure. Because it is actually a postcard he sent me in response to a fan letter I sent him when I was 13 years old, and it is very important to me. I vaguely remember the drawings I sent him but more importantly he inspired a young artist by responding to me! I was an avid comic book reader and collector (as well as clipping illustrations out of magazines and collecting paperback covers) and among the artists that I followed and copied was Steranko. I admired him (and still do) for the craftsmanship in his comic book illustrations and then his switch to paperback covers and then back to comic book covers and then to his own publishing company. At the time it guided me away from concentrating on just being a comic book artist to the possibility of being an illustrator as I began to seriously consider a future career as an artist.

And on my “Introduction” page there is my drawing of a planned portrait of “La Bete” from Cocteau’s Beauty and the Beast, one of my many favorite films. Originally a study for a Beauty and the Beast painting from a few years ago, it has been sitting in my studio as I work out color roughs in between projects and deadlines. And he waits in all his majestic glory and grandeur.
Posted by Douglas Klauba at 11:31 AM No comments: From the dawn of the 20th Century came a new chapter in mankind's history, unleashed during a time of great war and destruction. It was the beginning of the Age of the Superpowers, yet with the closing of the Second World War, this new spark seemingly flickered and died. Until now! This explosive 0 issue features a story crafted by Justice collaborators Alex Ross and Jim Krueger, joined by artists Stephen Sadowksi and Doug Klauba, and featuring a final page painted by Ross himself! The story of Superpowers begins here, in the present day with the Fighting Yank, coming to terms with the ghosts of his past and present! Journey to the heights and depths of the Second World War as the story unfolds and come face-to-face with the great forgotten heroes of the ages, and solve the mystery of these legends disappearance after the great war!

That is how Dynamite describes the new series to arrive in stores early 2008. Originally titled, Superpowers it seems it is now titled, Project: Superpowers.
And I've seen some color proofs and this first issue looks very cool. I'm excited (really excited) to have worked on the inaugural issue. And truly just plain excited that I was hired to do more sequential work - which is what I love to do. Tell stories with my art.

Alex asked if I'd be interested in doing more sequential stuff and then Superpowers came about. I had seen the Newsarama article announcing the series and knew that this was a series that I'd be interested in buying. I've always been interested in the golden age characters and pulp heroes, so I knew that this was for me especially with the team of Alex and Jim Krueger on it. I was very surprised to be offered part of the story. I don't think I hesitated when Alex asked if I'd be interested in doing the "present day" pages of the story, seven and one half pages of art. Obviously, from the description above, my pages are the "present day with the Fighting Yank, coming to terms with the ghosts of his past and present" while the talented Stephen Sadowski handled the larger part of the story. More of my pages can be seen at my Project: Superpowers Gallery at www.comicspace.com/dklauba

Dynamite was great to work with and their heart is in deep with Superpowers. It's been in developement for some time and I'm thrilled to have been a part of it. More info on Project: Superpowers can be found at the Dynamite site:
www. DynamiteEntertainment.com
Posted by Douglas Klauba at 10:19 AM 7 comments: 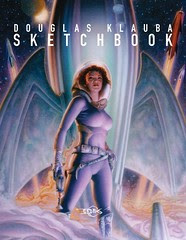 The Douglas Klauba Sketchbook is a soft cover, perfect bound 8.5 x 11 artbook with full color covers and 70 black and white pages of drawings, sketches and roughs showcasing the last 6 years of my projects for Sci-Fi, Pulp, Fantasy, Costumed Heroes and Cover Art for various publishers and clients.
Also a selection of Sequential Art pages from pencil to inks of my short story, "Raja Yah" originally published in Moonstone Monsters: Ghosts.
And for the first time ever a special section of never-before-seen preliminary art for The Phantom covers for Moonstone Books with commentary by historian Ed Rhodes and personal quotes from Ruben Procopio, Alex Ross and Thomas Blackshear.
Price $20.00

The book is available directly from me, from Moonstone Books, Dreamhaven Books and the Bud Plant website:
http://budplant.com/product.asp?pn=DOUGS&bhcd2=1197994276 Or in Canada from the fine folks at Girasol Collectables: www.girasolcollectables.com/

A limited edition, signed and numbered with pencil sketch on the title page is available for only: $45.00
Please email me for info.