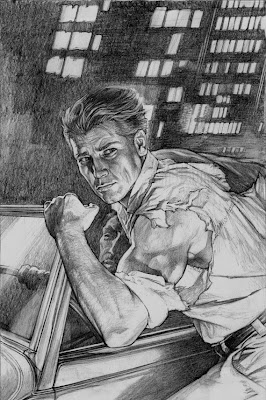 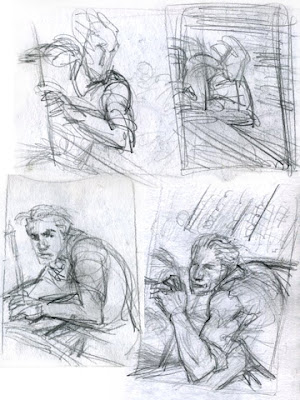 Another Moonstone Books exciting pulp release is soon to be available this summer: Doc Savage, The Lost Radio Scripts of Lester Dent. Among the choice of covers, you'll find mine along with an alternate by Bob Larkin.
From the start, when Joe Gentile started to discuss this cover with me, the pressure was on. Not from Moonstone (well a little) but my own pressure. I had grown up reading Doc Savage The Man of Bronze. First from Marvel Comics, then the Bantam paperbacks, then the George Pal movie (at least the one sheet looked cool!) and later on the pulp reprints and the fan club from Supergraphics. I had even co-published an amateurish fanzine called "The Doc Savage Fan Magazine" with a friend of mine on his mothers mimeograph machine way back in the mid-1970's.
So, the cover was important that it be identified to it's pulp roots as well as something contemporary for the modern book buyer. After focusing on my concept of the classic Pulp Hero, Clark "Doc" Savage as a supreme adventurer and adrenaline junkie, the process began: thumbnails and the typical scribbles to find effective shapes for the design and composition. I then called upon one of my favorite covers from 1935 as inspiration with Monk driving Doc on their vehicles side board at break neck speed. Before finishing the final painting, I added a bullet hole in the windshield to add to the "story" of the piece. 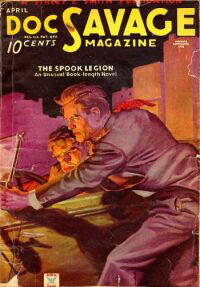 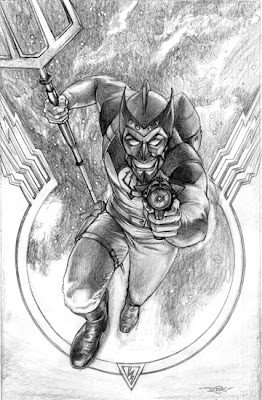 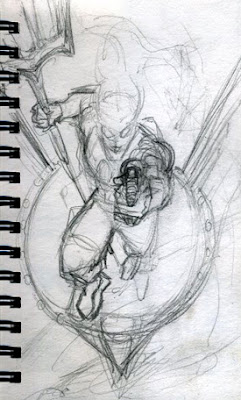 I met the creators of General Jack Cosmo a few years ago in Artist's Alley at Wizard World Chicago and they introduced me to their Sci-Fi universe by handing me one of their GJC Preview comic books. Aaron Shaps is a helluva writer and creator and I was very intrigued with what he had handed me to check out. We became quick friends (along with the rest of the creative crew Mike Beazley and Jim McKern) and... to make a long story short: I was commissioned to do a cover for one of their many ambitious projects, General Jack Cosmo and the Vampire Men of Kothos! Aaron describes him best as a cross between Flash Gordon and Hunter S. Thompson. I wanted to do an iconic image that would serve them best and represented an energetic-in your face- pitchfork ready- action pose for the cover and any other merchandise they had planned. I did pages of thumbnails but this one image returned time after time. Do yourself a favor and pick up #1 and #2 at your comic shop, an upcoming comic con or online.
Find out more at: www.cosmo-verse.com 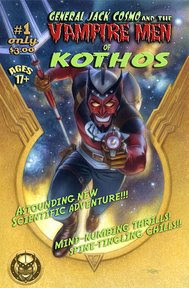 Posted by Douglas Klauba at 8:45 PM No comments: