The New Year started off with a "bang" for me and I've been steam rolling through the last few months with deadlines. I apologize for putting my blog on hold, but there just wasn't enough hours in the days. It also didn't help that I caught a virus back in late February/early March that knocked me out for four weeks. It then caused a domino effect of me trying to play catch up with the work load. Throw in family, tax season and holidays and I'm sure you get the picture around here.

I'm going to start back into the blogging with something Dynamite! (yeah - I really said it...)

This is the first of the Project: Superpowers Origin spreads that I'm painting for the series from Dynamite Entertainment. Scripts are by Jim Krueger and Alex Ross and I am amazed at how they can squeeze all the important elements of the golden age origin stories into a two page spread. Alex actually roughs out the layouts and emails them to me. So what isn't in the script, it is in the layout. There's an interview on Comic Book Resources explaining a bit more:
http://www.comicbookresources.com/?page=article&id=20944 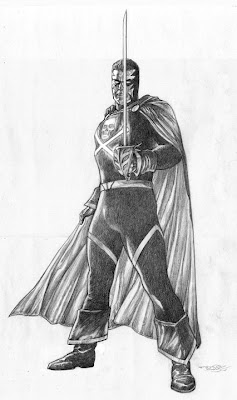 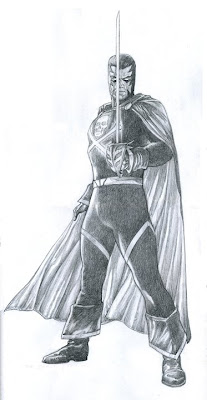 I first started out by doing a full figure pencil study of The Black Terror. Once it was approved, I penciled it onto the board with the sequential panels. After the spread was completed Alex and I discussed the finished artwork. The only major revision was to change the head position on the main figure. Another revision was the chemists' vial that Bob Benton was holding in the center panel. After reworking the pencil study to reposition the head, I got the go ahead. 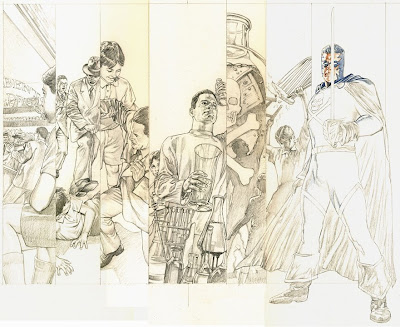 Here's a work in progress and then the revised and approved art to be published in Project: Superpowers Chapter 2 #0. 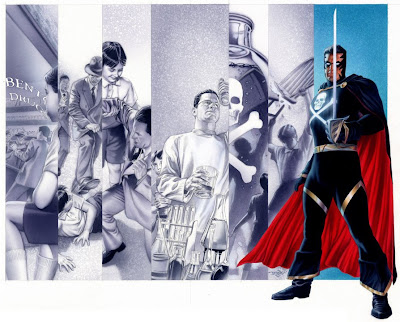 Changes were made right on the board, gessoing over the areas and redrawing and then painting. I also decided to darken areas to make the overall piece more dramatic and richer in tones. 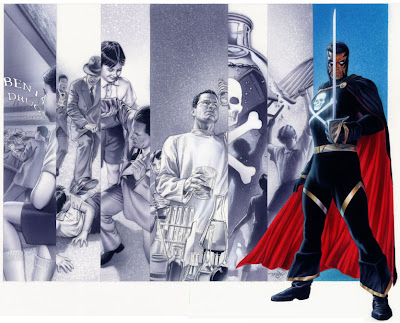