When I first started illustrating covers for Moonstone Books, Joe Gentile (Publisher and Editor in Chief) asked what covers would I want to do among the titles that they were doing. I asked about two characters: The Phantom and The Avenger.
It's been a long wait but I finally got my chance as Moonstone is about to release The Avenger Chronicles. The book will be released with two variant covers; one by Peter Caras and another by Dave Dorman. For the die hard Avenger fan, Moonstone Books is offering a special Limited Edition with some extra material and my cover featuring Justice Inc. 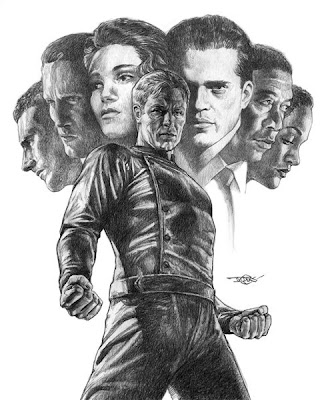 I had originally planned a straightforward cover featuring a grey Richard Henry Benson. And I tried a couple of different ideas, one concept specifically using an "A" similar to the posters for "A Clockwork Orange". 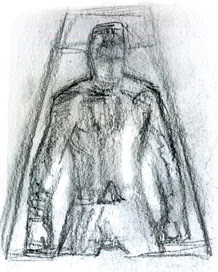 This concept later developed into a standing Avenger figure and the shadow sort of forming an "A" against a cold steel wall.
I gave it a shot but in the long run, it didn't work for me. 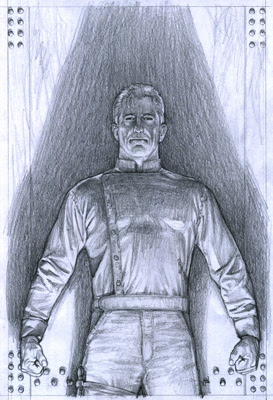 After seeing where I was at with the cover concept, Joe asked if it was possible to do the Justice, Inc. team as a cover for the limited edition. It was something that hasn't been illustrated before and he thought that it would be "special" enough for the Limited Edition.

So, I started fresh based upon our conversation and I came up with a more stylized costume for him, almost Nick Fury though.
But aside from this costuming not working (again) I had to figure out how to place the additional six figures with him, effectively and dramatically. Originally I avoided the floating heads idea because I didn't think it would work. So, I tried placing the figures behind him three on each side, but there wasn't enough room for that and keeping the central figure large enough without making it a wrap around cover. 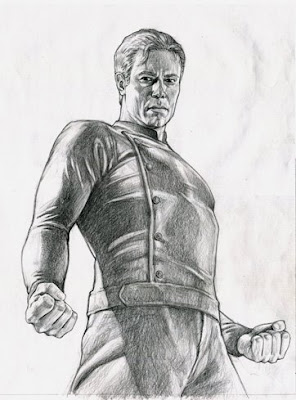 Finally, the floating heads idea clicked with me and I figured out how to pull it together, keeping the updated pose with some adjustment to his look and jacket. I can't really say what made it click for me, possibly walking away from it or looking at some books. The top image is the finished cover art completed in pencil.
Look for the release of the book soon from Moonstone Books.
Posted by Douglas Klauba at 9:38 PM

Wow, wow! Doug, I am so impressed. I can't wait to get my own copy!