Truth be told, I've never been a big Green Hornet fan. Growing up, I watched the television show from the 60's and one of my all time favorite Batman episodes from the 60's was the team up featuring Batman and Robin with The Green Hornet and Kato. I still love that episode - but that was it. Skipping ahead, I started listening to old time radio (OTR) episodes of the Green Hornet a few years ago. And- I enjoy them just as much as any crime detective OTR shows. Then Moonstone Books asked if I would do a cover for an upcoming publication featuring the Green Hornet and since I recently became a new GH fan, I finally decided to give it a shot. I started by looking through movie posters from the 1930's thru 1940's, and listening to the OTR shows for inspiration. The editor at Moonstone wanted a straightforward pulp art image, and focusing on that era, I wanted to do something that was instantly recognizable to the character.
I first worked on thumbnail sketches and decided on one I really liked.

And then developed a drawing to present to Moonstone Books for their cover: 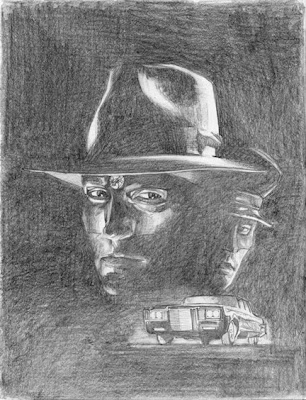 Once approved, I transferred the drawing onto the board and jumped right in by blocking in the darks: 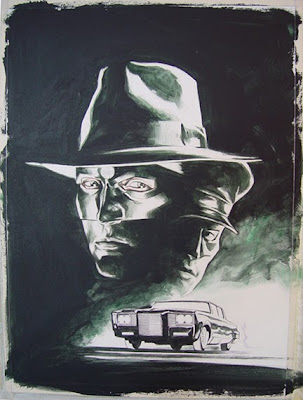 A dark and moody palette: 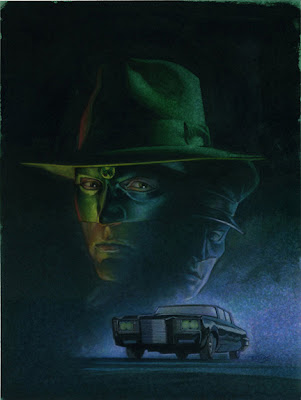 Something was missing - the finishing touch.... I soon realized I needed to make the car, Black Beauty, "come alive" by turning on the headlights. 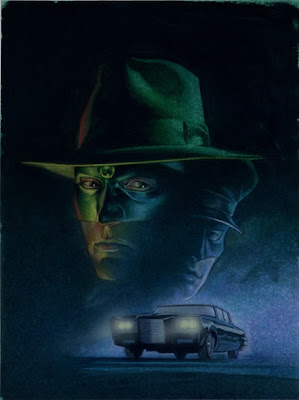 Posted by Douglas Klauba at 2:16 PM

NIce one Doug, love seeing the process too. And glad you are finally a Green Hornet fan.

Thanks Tom. Yes, finally a GH fan. Leave it to the OTR shows to win me over!

Always been a fan of your arts, what a great idea to show us the steps, Gorgeous, so well done, and an amazing talent, thanks for sharing Doug !

Thank you, Adam. I'll be doing another process post in the very near future. An expanded step by step to a painting that is currently featured in an article "Pulp A-Z" in the recent issue of Imagine FX magazine.

Thank you, Win. As I know you're one of the editors on GH at Moonstone, I appreciate your comment.

Will you be at the Windy City Pulp & Paper Convention this weekend?

Yes - I will be there! The best show of the year and I wouldn't miss it.

Haven't likes a GH cover since my pal Jeff Butler's work on our old Now Comics series. Way to go, Doug, I love this!!

Thanks Ron! When preparing for this cover, I used Jeff as the benchmark.

Doug---
I really love this cover. I've been a GH fan for quite a while.

I've only recently started reading The Spider. Just picked up a copy of 'The Spider Chronicles' with your cover art. Looks amazing.

By the way, this is Scott. I usually see you at Cons when I'm hanging out with Kevin O.

Oh Yes- hey Scott! Thanks for stopping by and commenting.