I had another wonderful pulp opportunity of illustrating the cover collection for the old time radio show “Rocky Jordan” available from Radio Archives this year. A  quick introduction for anyone who isn’t familiar with the show can be found on RA’s website; "Rocky Jordan" is very reminiscent of the classic movie "Casablanca." You'll remember that, at the end of the 1942 movie, nightclub owner Rick Blaine (Humphrey Bogart) and Police Captain Louis Renault (Claude Rains) walk off into the night, leaving Casablanca to join the Free French garrison across the desert. The settings of both stories are nearly identical: the desert sands, the fez, the turbans, the robes, the underworld lowlifes who visit the cafe. In "Casablanca," 'everyone comes to Rick's'. Not so in "Rocky Jordan;" the Cafe Tambourine is a lower-class establishment (in Cairo). It's more a waterfront dive, filled with forgotten men. And, unlike "Casablanca," the war is over -- but not the mystery or the intrigue. I really like the characters and stories - and enjoy working while listening to the shows.
The project presented some interesting ideas, but I felt I had a rough start pin pointing something special for the client. So I started diving into my sketchbook.
I originally was creating thumbnail sketches that were inspired by paperback covers by David Grove and/or Kazu Sano. I was interested in more of a montage of characters and setting with mood lighting and colors. I thought it would fit the right emotion that I got out of listening to the programs. 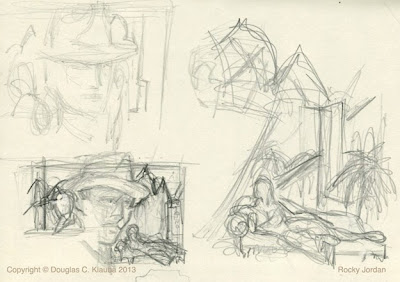 But, after looking at the quick thumbnails, I realized it just wasn’t going to work for the OTR audience and packaging. At least I crossed off one option and time to keep moving forward. So, I decided on a doing a scene reminiscent of noir film, or vintage pulp imagery with a femme fatale confronting Rocky. In the background I’d want the policeman Sam Sabaaya to be seen coming out of, perhaps, the Cafe Tambourine, just in time to help the situation and solve the case. That’s what I was thinking here and it was enough to get me going. 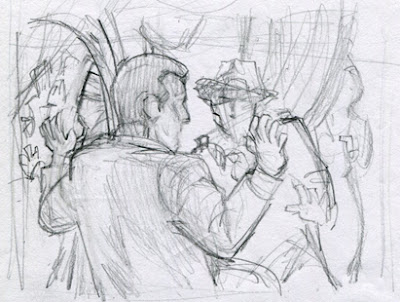 I sketched out a tense scene in the Cafe Tambourine and liked what was going on with the action and composition. Good story illustration but I felt it wasn't working yet. It would be a nice sequential panel but with Rocky's back to us wasn't good for a cover. The best solution was to turn him around and get the viewer involved, and I did a quick rough sketch to see what I thought. 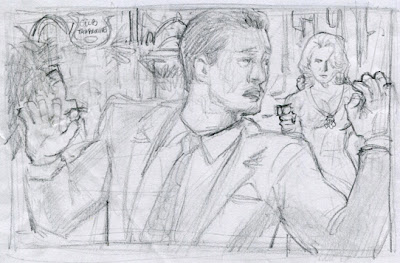 The more I left this idea alone, the more it kept growing on me. I decided to move forward with this for the moment and see what I can do with it. Once I shot my model for Rocky Jordan and collected my other references, I pulled together a tight drawing - and I ended up really being pleased with the results. I pulled back on the composition to see more of the figures, especially Rocky in front. Tom Brown at Radio Archives agreed and approved the drawing right away and I was thrilled to begin painting this one. 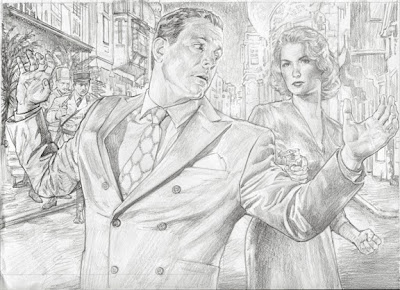